The Defence Medal is a campaign medal instituted by the United Kingdom in May 1945, to be awarded to citizens of the British Commonwealth for both non-operational military and certain types of civilian war service during the Second World War

The duration of the Second World War in Europe was from 3 September 1939 to 8 May 1945, while in the Pacific Theater it continued until 2 September 1945. The Defence Medal was instituted by the United Kingdom in May 1945, to be awarded to British military and civilian personnel for a range of services in the United Kingdom, and to Commonwealth and British Colonial personnel who served from or outside their home countries in a non-operational area or in an area subject to threat, such as attacks from the air.

The Defence Medal was awarded for non-operational service in the Armed Forces, the Home Guard, the Civil Defence Service and other approved civilian services during the period from 3 September 1939 to 8 May 1945 (2 September 1945 for those serving in certain specified territories in the Far East and the Pacific),[4] with an earlier end date for members of organizations that stood-down before May 1945

In the United Kingdom, those eligible included military personnel working in headquarters, on training bases and airfields for the duration of the War in Europe from 3 September 1939 to 8 May 1945, and service by members of the Home Guard during its existence from 14 May 1940 to 31 December 1944. The medal was also awarded for non-operational service overseas in the Dominions of the Commonwealth and in British Colonies.

Those who qualified for one or more Campaign Star could also be awarded the Defence Medal.

The War Medal 1939-1945 is a campaign medal which was instituted by the United Kingdom on 16 August 1945, for award to citizens of the British Commonwealth who had served full-time in the Armed Forces or the Merchant Navy for at least 28 days between 3 September 1939 and 2 September 1945.

The duration of the Second World War in Europe was from 3 September 1939 to 8 May 1945, while in the Pacific Theatre it continued until 2 September 1945. The War Medal 1939-1945 was instituted by the United Kingdom on 16 August 1945 and was awarded to all full-time personnel of the armed forces and Merchant Navy for serving for 28 days, irrespective of where they were serving, between 3 September 1939 and 2 September 1945 inclusive, the full duration of the Second World War. In the Merchant Navy, the 28 days had to have been served anywhere at sea.

The qualification requirement for the award of the War Medal 1939-1945 to full-time military personnel was 28 days of service, wherever rendered. Qualifying service in the Merchant Navy was 28 days of service anywhere at sea during the qualifying period. Foreign citizens commissioned or enlisted into British Forces, who did not receive a similar award to the War Medal 1939-1945 from their own Governments, were also eligible to qualify for the award of this medal.

The 1939-1945 Star is a military campaign medal instituted by the United Kingdom on 8 July 1943 for award to British and Commonwealth forces for service in the Second World War. Two clasps were instituted to be worn on the medal ribbon, Battle of Britain and Bomber Command.

The institution of the 1939-43 Star (later named the 1939-1945 Star) was announced on 8 July 1943 and, in August, it was announced that the first uniform ribbon bars would be issued to qualifying personnel later that year. The medals themselves were not intended to be available until after the cessation of hostilities. Some ribbon issues to overseas troops were delayed, but many had been received by the end of 1943 and were worn by recipients throughout the remainder of the war. By March 1944 1,600,000 personnel had received 1939-1943 Star ribbon bars, with further awards made by the end of the war.

The 1939-1945 Star was awarded for operational service between 3 September 1939 and 2 September 1945, and was the only campaign star that covered the full duration of the Second World War.

The 1939-1945 Star was awarded for specified periods of operational service overseas between 3 September 1939 and either 8 May 1945 in Europe or 2 September 1945 in the Far East theatre. The broad criteria were 180 days of service between these dates, with more specific criteria depending on service arm.

he Africa Star is a military campaign medal, instituted by the United Kingdom on 8 July 1943 for award to British and Commonwealth forces who served in North Africa between 10 June 1940 and 12 May 1943 during the Second World War.

Between 10 June 1940 and 12 May 1943 British forces fought in North Africa against the Germans and Italians, who had control of large areas of Egypt, Libya and Tunisia and therefore threatened the Suez Canal and the approaching sea lanes. During the desert conflict the balance of power alternated between the two sides, until the remaining German forces surrendered at Tunis on 12 May 1943. Some historians consider the victory over the German forces in North Africa to have been the turning point in the war which led to the eventual defeat of Germany.

The institution of the Africa Star was announced on 8 July 1943 and in August it was announced that the first uniform ribbon bars would be issued to qualifying personnel later in that year. The medals themselves were not intended to be available until after the cessation of hostilities. Some ribbon issues to overseas troops were delayed, but many had been received by the end of 1943. By March 1944 1,500,000 personnel had received Africa Star ribbon bars, with further awards made by the end of the war.

The Africa Star was awarded for a minimum of one day's service in an operational area of North Africa between 10 June 1940 and 12 May 1943. The operational area includes the whole of the area between the Suez Canal and the Strait of Gibraltar, together with Malta, Abyssinia, Kenya, the Sudan, both Somalilands and Eritrea. Areas not bordering on the Mediterranean only qualified for the Africa Star between 10 June 1940 and 27 November 1941 inclusive.

The 8th Army Clasp was awarded for service with the Eighth Army between 23 October 1942 and 12 May 1943 inclusive. An Arabic numeral "8" is worn on the ribbon bar in undress to denote the award of this clasp.

The Italy Star is a military campaign medal, instituted by the United Kingdom in May 1945 for award to British Commonwealth forces who served in the Italian Campaign from 1943 to 1945, during the Second World War.

After their victory in North Africa, the Allies used their positions in Tunisia and Malta to invade Sicily, a campaign that lasted from 10 July to 17 August 1943. After this swift victory, the Allies pressed on into Italy on 3 September 1943, they also invading Italian-occupied Greece, Yugoslavia, Corsica and Sardinia. The campaign in Italy itself continued until the end of the war in Europe on 8 May 1945.

The Italy Star was instituted by the United Kingdom in May 1945 for award to those who had served in operations during the Italian Campaign, from the capture of Pantelleria on 11 June 1943 to the end of active hostilities in Europe on 8 May 1945.

The eligibility criteria for the award of the Italy Star was different for service at sea, on land and in the air.

The France and Germany Star is a military campaign medal, instituted by the United Kingdom in May 1945 for award to British Commonwealth forces who served in France, Belgium, Luxembourg, the Netherlands or Germany and adjacent sea areas between 6 June 1944 and 8 May 1945, during the Second World War.

The Allies launched their campaign in North West Europe on 'D-Day', 6 June 1944, when British, American and Canadian forces landed on the beaches of Northern France. Over the following eleven months, these forces advanced across Western Europe while the Russians advanced towards Berlin from the East, Germany finally surrendering on 8 May 1945.

The France and Germany Star was instituted by the United Kingdom in May 1945, for award to those who had served in operations on land or in the air in France, Belgium, Luxembourg, Holland or Germany from 6 June 1944 until the end of active hostilities in Europe on 8 May 1945, as well as for Naval and Merchant Navy service directly in support of these land operations.

The France and Germany Star was awarded for entry into operational service in France, Belgium, Luxembourg, Holland and Germany between 6 June 1944 and 8 May 1945, both dates inclusive. The qualifying sea area was south of a line from the Firth of Forth to Kristiansand (South) in the North Sea, east of longitude 6° West in the Bay of Biscay, and in the English Channel, provided such service was directly in support of land operations in France, Belgium, Luxembourg, Holland or Germany.

The MC is granted in recognition of "an act or acts of exemplary gallantry during active operations against the enemy on land" to all members of the British Armed Forces of any rank.

The award was created on 28 December 1914 for commissioned officers of the substantive rank of captain or below and for warrant officers. The first 98 awards were gazetted on 1 January 1915, to 71 officers, and 27 warrant officers. Although posthumous recommendations for the Military Cross were unavailable until 1979, the first awards included seven posthumous awards, with the word 'deceased' after the name of the recipient, from recommendations that had been raised before the recipients died of wounds or lost their lives from other causes.

Awards are announced in The London Gazette, apart from most honorary awards to allied forces in keeping with the usual practice not to gazette awards to foreigners.

From August 1916, recipients of the Cross were entitled to use the post-nominal letters MC,and bars could be awarded for further acts of gallantry meriting the award, with a silver rosette worn on the ribbon when worn alone to denote the award of each bar.

From September 1916, members of the Royal Naval Division, who served alongside the Army on the Western Front, were made eligible for military decorations, including the Military Cross, for the war's duration. 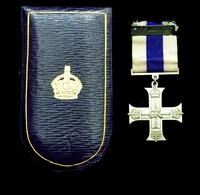 In June 1917, eligibility was extended to temporary majors, not above the substantive rank of captain. In 1931, the award was extended to equivalent ranks in the Royal Air Force for actions on the ground.

A special coin awarded to the members of the 51st Highland Division who took part in the invasion of the Italian Island of Sicily. Seldom seen and to be considered very rare ! 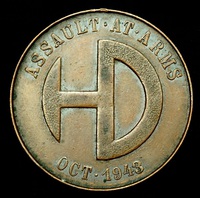 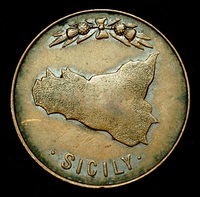 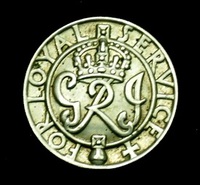 The King's Badge is a large silver lapel badge authorized by the Ministry of Pensions in the early part of the Second World War and initially issued to servicemen who, as a result of their injuries, had been discharged from active service. It was to be worn only on civilian clothing and by the end of 1941 over 8,000 had been awarded.

Its basic purpose was to show that the wearer was a veteran. As well as members of the armed services, merchant navy and fishing fleets qualifying, by late 1944, it was also awarded to the coastguards, police, members of the Civil Defence Services, and the Home Guard. 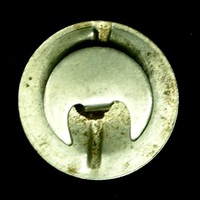 Like the better known Silver War Badge of World War I, the King's Badge included the initials GRI for Georgius Rex Imperator, in this case referring to King-Emperor George VI. The earlier badge was in the name of his father, George V. The wording around the initials was also changed from For King and Empire Services Rendered to For Loyal Service. While it did come with a certificate, the King's Badge was not serially numbered.

Set containing ribbon bar with 8th army clasp and mounted medals. As you can see this particular soldier dit not receive the defence medal and was most likely overseas for a long period of time.

Mounted set of miniature medals. These where used for special occasions only.
This set does not have the 8th army clasp.

Photos taken in NW- Europe. Sgt, Webster is sitting on the left on the left photo and standing far right on the photo above.